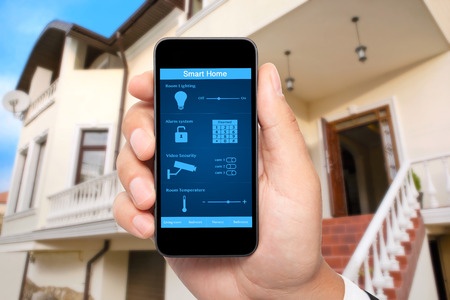 The past several years has seen more use of apps regarding over home security. Software companies have shown that their products can indeed monitor and process information that allows for the operation of systems at home via remote and do so securely.

Apple has led the front regarding home security devices and business security devices. Being able to use keyless security has become a growing business and continues to improve along the way. The use of apps that allow for voice and facial recognition to operate doors, lights, security cameras, and more have grown in popularity and use and that beckons even more complex commands and operations be created for a fuller home security experience. In like the systems seen in those futuristic movies and televisions hows like ‘Star Trek’, today’s home owner can command things from remote via their smartphone or hand-held computer device. They can even open and shut automatic shutters, gates, even let the dogs out of the house to run around the enclosed grounds and call them in. Open source projects have developers scrambling to come up with all sorts of ideas and useful home security applications and products.

Recently, Facebook boss, Mark Zuckerberg announced that he was developing a new AI system likened to that of the Marvel Comics ‘Iron Man’ movie butler ‘Jarvis’. In these movies, Jarvis operates huge industrial and home venues for Tony Stark his owner. Stark can order Jarvis to open doors, start his cars, access the web, and even make coffee. Zuckerberg announced he wants his software to do that and more. With his support he’s been chatting with fans and developers to work on these systems and there’s no reason for it not to come to fruition considering the amount of genius at his behest as well as funding.

Most people are already familiar with such voice-operated systems like Siri, but that is primitive compared to what Zuckerberg and other business moguls want for the near future.
The advantages to these new apps and home security is in that it can streamline many systems, operations, and become cost effective. The bottom line to all home security or any security system is in its effectiveness. Today’s locksmith is going to have to get retrained in how to install and repair these systems and then keep up on the technological advances along the way.

What it will take to achieve these goals is going to be teamwork and lots of field testing. Home security cannot have a second chance. It will either work all the time or it’s no good. In addition, protection against hackers will be of paramount concern. Using computing for any essential purpose invites those who would compromise them and hacking is the number one way to go. This is going to be a secondary industry in its own but one of major importance.

So get ready for the new age of home security. There’s no telling where it’s going but with responsibility and luck it could go the right way.

Security locker in Florida and Tampa

For more about locks.