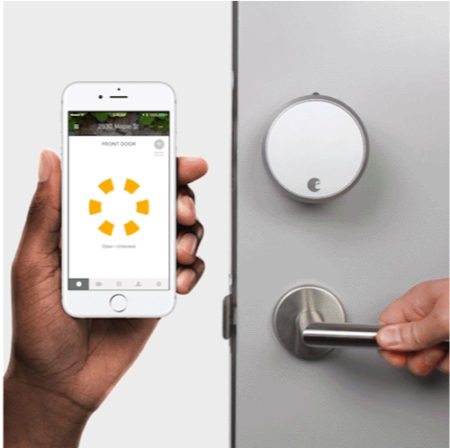 Gone are the days when a door lock was just a piece of metal placed on your door and used alongside a key. We’re living in the era of technology and the concept of smart home is being adopted by more and more people. When entering such a location, you will – most likely – observe a relatively uncommon electronic entry system, which doesn’t look at all to what you are used. Yes, that’s a smart lock!

These…gadgets are being used by hotels for a few years now, as some of them have ditched the keys and replaced them with cards. But they’re also excellent for private locations. Thanks to the technology they integrate, an owner can keep track of the times when the door was opened or closed, control it from a distance, through the Internet, or even open a door with a fingerprint.

Ok, so this sounds good and you also want to make the jump to one. Despite being something new, there already are a lot of smart lock models to choose from. But we’re here to help, as we’ve analyzed the market and put together a list with three of the best options you can make for your home.

At first, it doesn’t look that special or very smart, not to mention that it can require a locksmith to install it. However, this little piece of technology has a lot of aces in its sleeve. Keeping it short, if you want to secure your home, it’s the product to get.

Among the features we can find an illuminated keypad and compatibility with Apple’s HomeKit. Combine it with the manufacturer’s new HomePod smart assistant and you can even open and lock your door by voice!

What made us include this smart lock model in our top is the fact that it can actually replace a deadbolt, as well as the easy installation process. And once you’re done with it, you will barely notice it on the door. Unlike the model from Schlase, the August Smart Lock Pro is compatible with several voice assistant, like Amazon Alexa, Apple HomeKit, Google Assistant or Samsung’s SmartThings. And you won’t believe in how many ways you can control it. Bonus points for the design, by the way!

Moving on, we have another Apple HomeKit-compatible smart lock, but this time coming from the folks over at Kwikset. And it’s not mandatory to have an Apple TV in order to get full control of it, since you can also rely on your iPhone for this, as long as it’s compatible with Siri.

The app through which the lock is controlled has a very user-friendly interface and comes with several advanced features. We’re really fancying the ability to set individual access schedules, which is great for various types of locations, not just homes.

For those who are still not ready to embrace technology to its fullest, it’s also compatible with traditional keys. But come on, you can’t even imagine how cool is to control your door by voice!

Of course, these are only a few of the models you can choose right now if you’re planning to make the transition to a smart lock.

No matter if you’re using a traditional model or a smart one, problems can always occur. And there’s no need to break down your door, since Florida Lock Doctor is always happy to help. By bringing quality workmanship at a fair price, no matter if you’re having issues with a car door, a safe, or in commercial or residential locations.